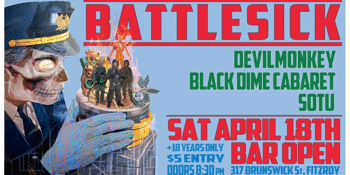 After 4 years of lurking in the shadows, we decided and announced we were playing one last show. The venue was set and so were we. Then we were set and the venue disappeared. #RIPbombayrock

“Questions, Coments?” was our debut EP recorded with Goatsound Records. It's since completely sold out of all copies. We began in 2013 with a non-conventional lineup: two bass players pumping separate tones of loud, crunchy, industrial synth and heavy funk, supporting rich, alternative rock vocals drenched over programmed drum machines.

These two bass players and one vocalist…?
Huf, Buckley and 12 Sandwiches.

Battlesick is bringing back this freshly-reinvigorated-original-line-up with a mega party at Bar Open, Saturday 18th of April.

Bar Open will be the first to get a dose of 2020's newly re-reconstructed Battlesick.

We’re also bringing back our multi-projector live set up. Battlesick blankets any venue in a light show installation - shining thick colourful surreal imagery throughout the room. The film jump-cuts are crafted from collected 16mm, 8mm and Super 8 film prints, nicely spliced into an immersive surreal live art show perfectly accompanying synth/vocals, drums and bass for one hell of an original and energetic interactive experience.

Joining us on the night are:

Sotu_Rock
Raw, Noisy Rock - Melbourne style; the way it used to be back in the nineties.